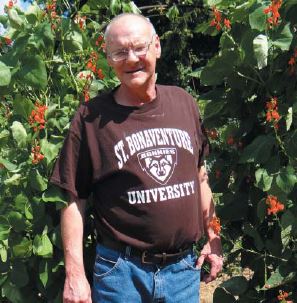 When longtime Evergreen Elm gardener Betty Bailey couldn’t plant her red runner beans this spring because of a health problem, it was a chance for someone else to step in, maybe win a blue ribbon in her absence.

Instead, fellow gardener Randy Johnson stepped up. He was asked if he would plant Betty’s beans for her, and possibly enter them in her name  at the McKean County Fair. His answer surprised no one.

Betty is Randy’s friend. Randy misses her. And Randy is, in the words of master gardener L.A. Rotheraine, “absolutely unselfish.” Of course he would do it.

On a sweltering day in the midst of a heat wave in July, with the fair fast approaching, Betty’s beans are thriving again, a tangle of bright red flowers and heart-shaped leaves
vining skyward.

In the fall of 2001, Randy was helping L.A. with a land reclamation project for the Bradford City Water Authority. They were spraying a liquid compost preparation over residual water waste — sludge — to try and get grain seeds to grow on previously barren land. The seeds did grow, again proving the effectiveness of biodynamic techniques.

It was a success, but the pair also ended up with the story of a lifetime. Somehow, L.A., who is 6’2, fell into a four-foot pit of sludge. He was in up to his knees, trying to move his legs
but feeling like he was in quicksand. Randy didn’t hesitate, hopping in and pulling out his friend.

“Randy has a heart of gold,” says Sheila Potter, supervisor of the residential group home on West Corydon Street where he lives. Two stories, Randy in a nutshell. Others who know this heart of gold could tell countless more.

At 55, Randy Johnson is slowing down like anyone else, but he still looks fit in his brown SBU tee shirt. Working outside a lot will do that. It’s mid-morning and he and L.A. are talking to a visitor in the grapevinecovered arbor at the back of the garden, where the air is cool, relatively speaking. In the sun, it’s already in the mid-80s and climbing.

Randy is 5’8, almost as tall as the nearby cherry tomato plant that will surpass 12 feet in the coming weeks. He tilts his head to the side when he’s especially interested in what’s being said, inspecting the world with his steely blue eyes.

His gray hair is cut in a buzz, and he’s a beehive of energy. When L.A. mentions the need for a second golden zucchini planting, Randy jumps up, tugs on his jeans and reaches for a cigarette. “Where are we going to plant them?” asks L.A. “Right over there,” Randy says, pointing toward an empty spot in the garden. L.A. says that’s exactly what he was thinking.

It’s no wonder the two complete each other’s thoughts. Randy and L.A. have been together since the building of the garden in 1990. The plot of land on Elm Street starting up the hill toward High is in a neighborhood that was once home to hundreds of Italian immigrant families, many of whom had gardens. That’s not to say Randy and L.A. inherited an oasis lovingly nurtured through the generations.

They actually inherited a vacant lot strewn with junk and debris and broken foundations where houses once stood. Along with the late Larry Lind, Randy and L.A. were the groundbreakers of Evergreen Elm’s Garden Therapy program, but they didn’t break much ground — they just built over top of the mess. Today, the garden is a sanctuary above the railroad tracks, the concrete flood control walls and the 219 expressway lanes, above River Street, where the Prohibition-era gangster Al Ritchie was murdered. Cabbage, squash, zucchini, hot and sweet peppers, eggplant, lettuce, carrots, herbs, beets and of course tomatoes are planted on mounds in neat rows. Sunflowers, Randy’s favorite, shoot up here and there.

A white fence keeps the world out, but rabbits and woodchucks find a way in. In the spirit of the place, they’re not poisoned, shot or trapped. They’re offered a decoy area of tender lettuce, a tantalizing buffet, an arrangement. It works.

Seven residents work in the garden. Three of them are regular planters. Randy used to work here every day, but now he just comes on Thursday afternoons after finishing work at Futures, where he enjoys washing dishes in the cafeteria.

They do biodynamic gardening: a nod to the heavens, no chemicals and nothing artificial, certainly not the hard work, camaraderie, care and love put into the earth here.

That second crop of golden zucchini is needed because the first one quickly sold out to local restaurants like Glendorn and the Pennhills Club. So this biodynamic duo leaves the protection of the arbor to get to work in the baking sun.

Randy puts on work gloves that look like they’ve been around since the first day he got here, picks out a zucchini plant and waits for L.A. to dig a shallow hole. Randy doesn’t exactly baby the tender vegetation, tossing it in from hip height and then pulling a bit of the soil around the plant. He’s done this a time or two.

L.A. points to where the water should go, and Randy hits the spot. In a month or so, it’ll be harvest time again. While working, Randy channels all that nervous energy. He looks calm and relaxed. “It gives him something do,” says Sheila. “He doesn’t have a lot of things to do with his time.”

A few yards away, Randy’s tomatoes are getting there. Large green ones are ready to be picked. He started his tomato seeds in a tray in early March, and by Good Friday, which was on March 29 this year, his eight tomato plants were in the ground. They had to be covered a few times, including during May’s brief flurry of snow.

In early August, L.A. will sit some of the gardeners down at a table inside the arbor and give them numbers on cards. They’ll taste tomatoes and, like Olympic judges, flip up a score. It’s how L.A. finds out if the tomatoes are ready. Most who hear this job description say the same thing — where do I sign up?

Some of the aims of garden therapy are to improve physical and mental well being, ease anger and anxiety, encourage teamwork and socialization, and promote community interaction.

That interaction is especially important. Randy often accompanies L.A. to Glendorn, where Randy knows the chef. It follows that now the chef knows Randy. Little by little, perceptions of people with intellectual disabilities change.

It’s come a long way since the early 1990s when L.A. remembers open hostility for the garden and adjacent group home. Only a bit of that remains today, he says.

“Randy’s one of my closest friends in the world,” says L.A. “You couldn’t ask for a better soul and spirit. If the world was full of Randy Johnsons, there would be no wars.” And certainly no shortage of zucchini.